skip to main | skip to sidebar

Ms Eva Brunne was confirmed today as the 8th Bishop of Stock-holm after some legal wrangling (unjustified). Bishop Brunne who was elected by a majority of delegates on the 21st of April is partnered with another woman, who is also a Priest. Bishop Brunne will be consecrated on the 8th of November at Upsala Cathedral together with Finnish born Ms Tuulikki Koivunen Bylund, the new Bishop of Härnösand. Ms Brunne is currently Diocesan Dean of Stockholm and Ms Koivonen Bylund is Dean of Upsala.
Upplagd av Göran Koch-Swahne kl. 5:28 em 13 kommentarer:

With kind permission of the author, The Reverend William Fleener, Sr, Priest of the Episcopal Diocese of Western Michigan, retired.

“For instance, reading any statements in the Bible about sexual behaviour without recognizing that women were “things”, some-what less than men in completeness of humanity. All women were owned by their fathers until title to them was transferred to their husbands. For a man to have intercourse with a woman who was unmarried was an act of stealing from her father, who could no longer expect to receive a bride price in exchange for “giving a-way” (strange term, because it was a sale, not a gift) his daughter.

For a man to commit adultery was a matter of stealing the pro-perty of her husband.

Also, there were no “temple prostitutes”. Prostitutes sell sex for money. Baal temple priestess were fertile ground in which a man planted his “seed” in order to guarantee that Baal would bless his planting of seed in his land and his wife and the planting of seed by his male animals in his female animals. At the time of “planting” in the priestess, an offering was given to the Baal temple, but it was not to pay for the sex act.

By the time the Hebrews spread into the land after the Exodus, the Baalists had found out that some men’s families were in danger of not having good crops because those men could not respond to the female bodies of the priestess and plant their seed in them. The had chosen a few of such men and made them priests, to which the same-sex oriented family heads could go to plant their seed and guarantee Baal’s gift of grain to feed their families.

The women counted for nothing except receptacles, and inter-course with them was considered essential to good crops, not as stealing/adultery.

Asking the people who had been farming the “promised” land for many generations how to guarantee good crops was no different from the English colonists in this country following the advice of Native Americans to put a bit of fish in with each mound of 4-5 corn seeds. The difference between the two is that the colonists considered the American Indians to be ignorant savages, and missed the “worship” content of the natives’ connection with the land and the Great Spirit who had given the land.

“The plain meaning of Scripture” has to take into account the meaning the words had to the original writers and hearers, not just what the words seem to us to convey in Century 21.

By the way, God seems to have negated the custom of ownership of women when Mary of Nazareth didn’t have to ask the Angel to wait, while she asked her father and Joseph for permission to accept her “call” to bear the Christ child. I look no farther than Luke 1:26-38 for the origin of the feminist movement. It took us a very long time to hear God saying women could make their own decisions, and we didn’t hear it until that idea gained popularity in our society, but it was our message originally.”

Pinched from the House of Bishops/House of Deputies (of the Epis-copal Church) list.

PS The Reverend Fleener has kindly let me know than anyone interested is free to reprint this.
Upplagd av Göran Koch-Swahne kl. 5:21 em 9 kommentarer: 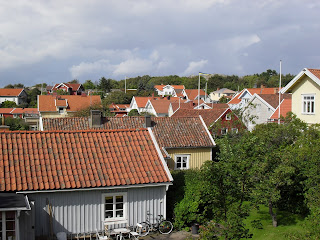 Pictures of my Cabin and part of the sur-roundings on Styrsö are now on my Face Book page.
Upplagd av Göran Koch-Swahne kl. 9:45 fm 2 kommentarer:

"The COVENANT. Why do we need another COVENANT? We have the Baptismal COVENANT. We have the CREEDS." Archbishop Martin de Jesus Barahona, Central America